from genes to molecules

We are a chemical biology group that focuses on the study of natural products. Natural products are highly evolved and functionally privileged compounds that often display complex chemical structures. These molecules have inspired generations of synthetic organic chemists, unveiled numerous fundamental biological processes as chemical probes, and served as the most significant source of chemical matter for drug discovery.

As the field of genomics has expanded, it has revealed a vast untapped wealth of natural products encoded in the DNA of sequenced organisms, particularly bacteria. Our lab has developed new tools to expedite the discovery of natural products from genomic information, including molecules from bacteria that cannot be cultivated in a lab. In particular, our lab focuses on Ribosomally synthesized and Post-translationally modified Peptides (RiPPs) which have genetically encoded substrates and an incredible diversity of post-translational modifications. Using a genes-to-molecule approach, we have uncovered numerous structurally unique RiPP molecules and revealed the unprecedented mechanistic enzymology through which they form. We can then leverage this knowledge to produce new-to-nature compounds with improved properties or novel activity with the long-term goal of unleashing the full synthetic potential of Nature to reshape the diagnosis and treatment of human disease. 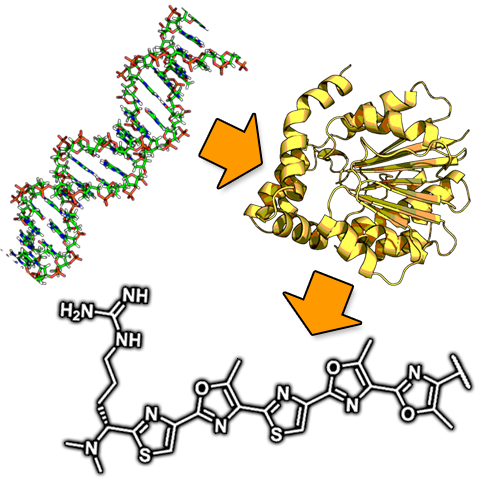 Lonnie has published a chapter in Methods in Enzymology describing the use of reactivity-based screening for the discovery of natural products with specific functional groups.

Sangeetha, Lonnie, and former members Xiaorui, Adam, and Bryce, along with collaborators in the Pogorelov lab, published a paper in ACS Chem. Biol. where they report an update to RODEO featuring a graspetide-specific precursor peptide scoring module.

Yuanyuan, Ashley and Laura published a paper in J. Am. Chem. Soc. that used cell-free biosynthesis (CFB) to rapidly generate lasso peptide variants and evaluate the substrate tolerance of the biosynthetic pathway.

Congrats to Adam for passing his PhD thesis defense and good luck to him as he continues his scientific career at Merck!

Former members Andi and Nilkamal have published a chapter in Methods in Enzymology detailing methods used for the investigation of peptide backbone thioamides installed by YcaO enzymes. 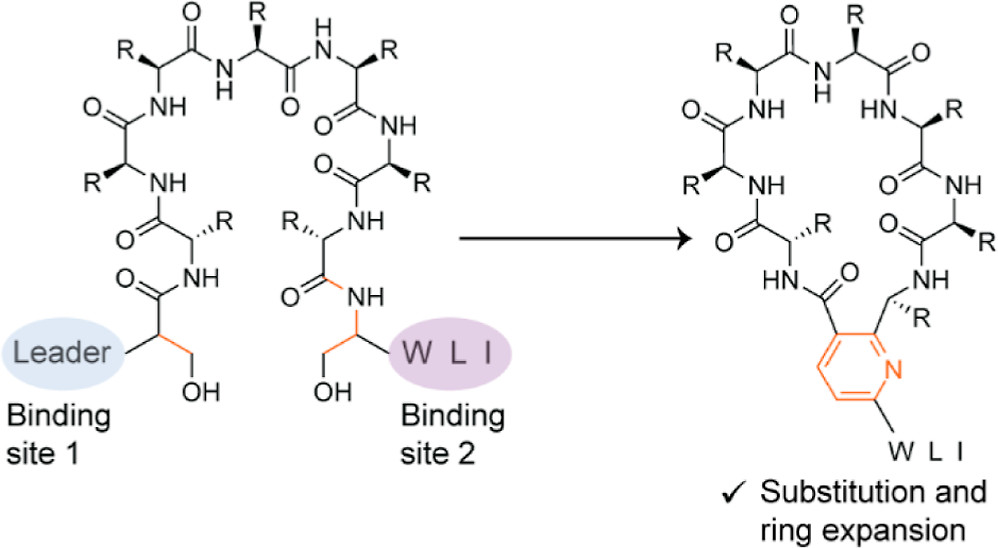 A collaboration between our lab and the van der Donk lab, facilitated by our joint student Dinh Nguyen, describes an enzymatic pathway capable of synthesizing pyridine-based cyclic peptides from 14- to 68-membered rings with diverse sequences. This pathway can be utilized with other post-translational modification enzymes (e.g., azole-forming enzymes) to form macrocyclic rings with backbone structures beyond amide moieties. Last but not least, we report the substrate recognition mechanism of the enzymatic pathway: the variable region on the substrate peptide is in between two distinct recognition handles, with each contributing to site-selective substrate modification.